I’m 100 hours into Hyrule Warriors: Age of Calamity (AoC). I’m having fun! I just finished the main quest and DLC quests, and have over 90% completion overall. Let’s discuss.

This review has a single unequivocal assertion: if you haven’t played (and ideally completed) Breath of the Wild (BOTW), stop now. Close your browser tab, go finish that game, and return here a few months older to think about Age of Calamity. It’s not that you can’t play AoC without finishing BOTW, but why would you? AoC is very much a backstory, behind-the-scenes follow-up to BOTW. It’s not like the Star Wars prequels where any viewing order is valid.

Actually nevermind, I’m incapable of unwavering opinions and shouldn’t gatekeep anyway. You’ll certainly miss some details and depth in AoC skipping BOTW, but we all must do what is best for our lives.

This game’s for you if you always wanted to cosplay the flashback scenes from Breath of the Wild, especially this one: 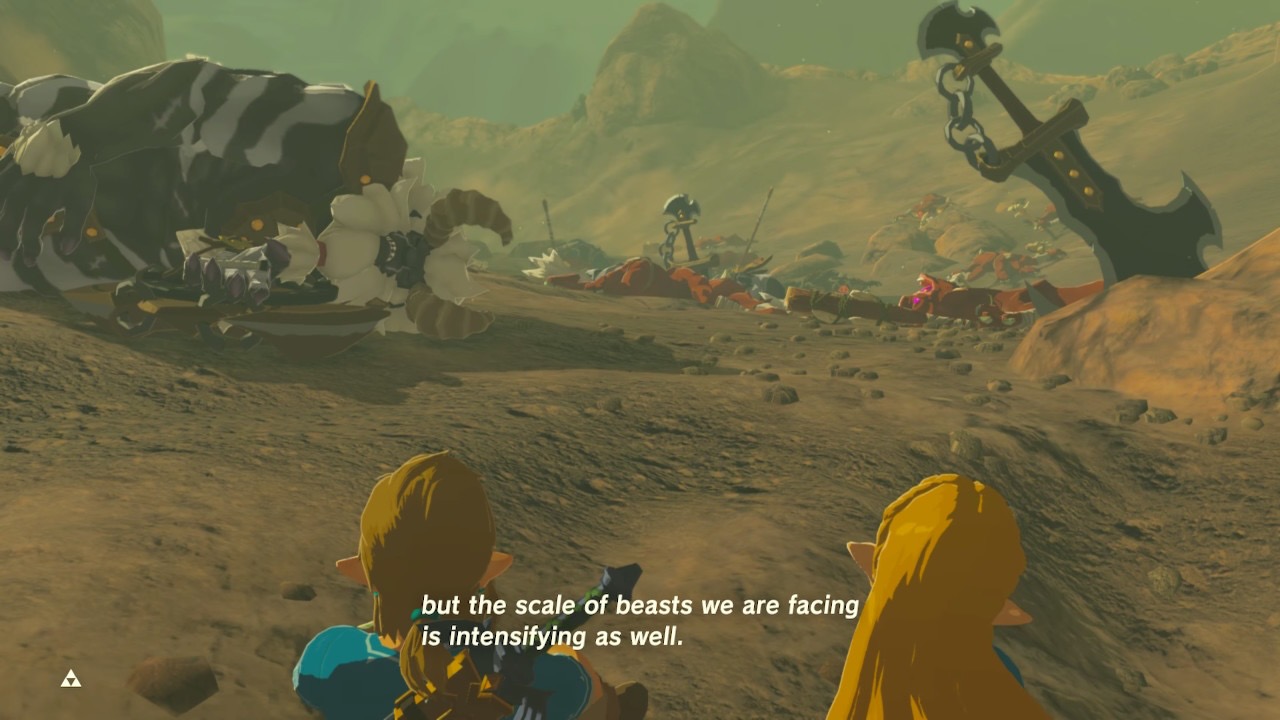 It’s sort of like STAR TREK (2009), in a good way? A flashy, noisy, action-heavy diversion in an established franchise, exploring and breaking the canon in weird ways. The more-content-is-better philosophy. The plot may not be totally coherent per se, but it’s good entertainment, and [leaving the Star Trek comparison behind] I quite enjoyed spending as much time as possible with the large cast of characters.

If you enjoy grinding, completing small tasks and side quests, optimizing and strategizing equipment, this game’s for you. This game is much bigger than I expected, and you can spend many hours diving deep. If you have a partner or roommate, make sure to check in occasionally to ensure the main menu music isn’t driving them mad—it’s pretty good music, but bystanders will hear a lot of it, especially if you play for completion.

I like the soundtrack. Some of it is pretty good, and the tone is appropriate.

Should you get the DLC? 🤷🏼. It’s not intended for the early stages of the game, so get to know it a bit and decide whether you definitely want more (I personally found the purchase worthwhile). It’s basically just more of the same stuff…more quests, more characters, more weapons, more cutscenes, no fundamental changes.

Casual players would certainly have a different experience with Age of Calamity. The combat mechanics are complex and it’s hard to imagine not spending some time improving your weapons or completing at least the essential side quests. However, though I haven’t really tried it, I think the game could offer a good experience for casual players who just want to see the story and bonk some bokoblins. The easy end of a wide range of difficulty settings is there if desired. Two-player mode is another interesting option for casual players: you can participate while letting your partner do the heavy lifting. I did try this and it worked well.

Or, if you like the Zelda franchise but really don’t want to invest the time in AoC, maybe find someone who has completed it and just watch all of the cutscenes.

Speaking of game mechanics: it took me most of those 100 hours to finally slow down, mash the buttons a little less frantically, and take a more mindful approach. The combat controls have a certain rhythm, and if you take the time to feel it out, you can get into a nice flow state and play more efficiently.

But anyway, tl;dr play this game if you’d like to perform a ballet with a lynel: